California’s Most Dangerous and Safest Cities for Drivers 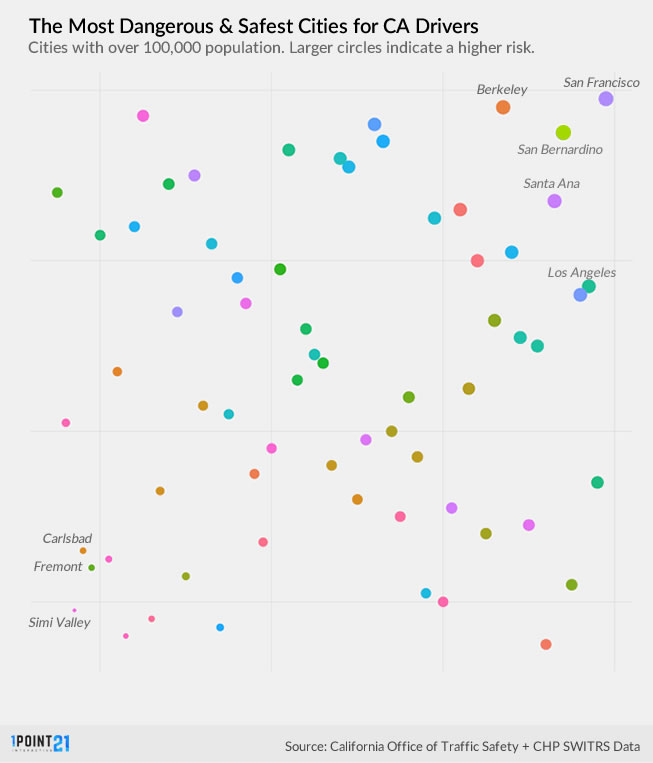 As a San Diego car accident lawyer who has handled hundreds of motor vehicle accidents throughout the state, attorney Scott Liljegren wanted to find out which California cities were safest and most dangerous to drive in. A new study by Liljegren Law Group and 1point21 Interactive examines the risks for drivers in the Golden State’s largest cities.

In this study, we ranked all California cities with populations over 100,000 based on nine different metrics across two dimensions: motor vehicle collisions and contributory factors.  Within these dimensions, we collected data and calculated each of the following for each city:

What’s the difference between a safe city and a dangerous one? On average, the 20 most dangerous cities in our study have significantly higher rates for all collision metrics analyzed, nearly 2 times higher than the 20 safest across the board.

Wet roads make a difference. The 20 most dangerous cities receive nearly 4 more inches of rain per year on average than the 20 safest cities.

Youth and inexperience impacts safety. Drivers aged 15-29 were involved in 51 percent of all collisions analyzed in our study, despite representing just over 22 percent of the population.

Larger cities are more dangerous on average. The average population for the 20 most dangerous cities on our list was 406,463 compared with 234,753 for the 20 safest.

America’s finest city: San Diego is the 18th safest city despite having the second highest DVMT of any city. This means that despite being second only to Los Angeles in miles driven each day, San Diego drivers are crashing at much lower rates. Additionally, our analysis found San Diego to be the second safest of cities with populations of 250,000 or higher, behind only Fresno. San Diego also boasts one of the lowest overall crash rates of any city in our study as well as the second lowest rate of speed related crashes.

The cities in our study accounted for 123, 512 total collisions, 749 fatalities, and 92977 injuries. Without further ado, here are the full results of our study, where a lower number indicates a more dangerous city to drive in.

The Safest and Most Dangerous Cities for Drivers In California

*All rates are calculated per 100 million vehicle miles traveled (VMT) 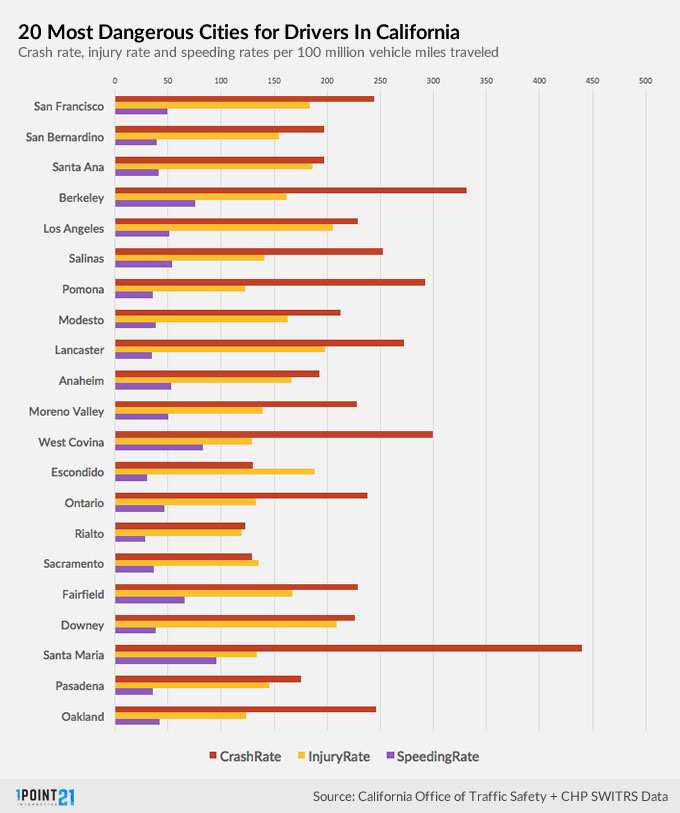 Infrastructure and Its Impact on Driver Safety

Within the Contributory Factors dimension, we logged the number of collisions that occurred when an unusual condition was present within the city infrastructure. This includes the presence of  holes or deep ruts in the road, construction, flooding, roadway obstruction as well as situations where the traffic control device was not functioning or obscured.

We analyzed data across two dimensions – collisions and contributory factors.  Within these dimensions, we identified and ranked nine metrics that affect road safety for drivers.  Our dataset and rankings are a reflection of the following: