What Is Bill AB5 and What Does it Mean for Rideshare Companies?

The debate over the classification of Uber and Lyft drivers as employees vs. independent contractors has been a long-standing one in California. Lawsuits against rideshare companies for allegedly misclassifying its drivers have traditionally not ended in favor of drivers, leading to a system that does not give rideshare drivers the rights or benefits of typical employees in California. If Assembly Bill 5 (AB5) passes into law, however, this may change. AB5 could force Uber and Lyft to classify their drivers as employees, not contractors. 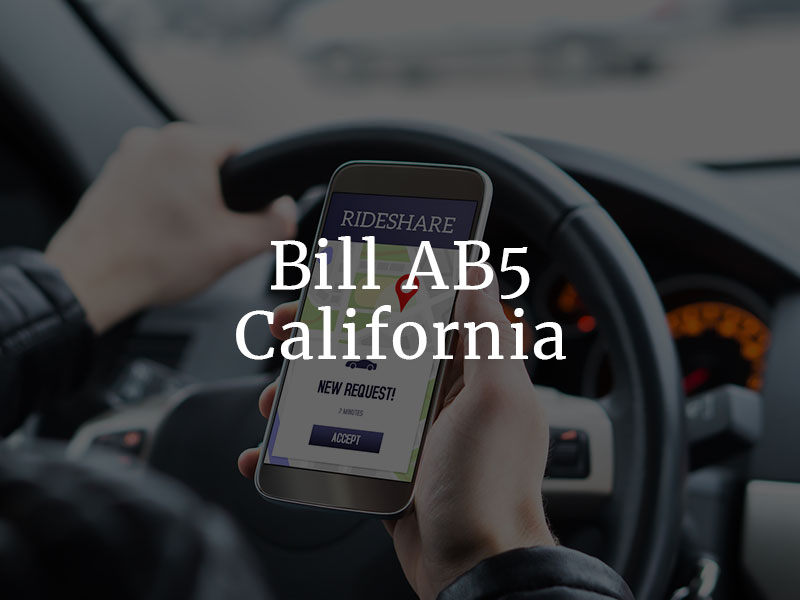 The distinction between an independent contractor and an employee is an important one in California. State laws largely favor employees, offering benefits such as paid medical leave, workers’ compensation insurance, employee benefits and job protections. The same laws do not apply to independent contractors or self-employed workers. These workers do their jobs without any of the myriad benefits of being an employee.

Historically, Uber and Lyft have classified their rideshare drivers as independent contractors. This is a departure from how traditional taxi companies classify their drivers, as employees. This issue has sparked debates across the country, ultimately leading to a U.S. labor agency counsel releasing an advisory memo saying that under federal law, Uber and Lyft drivers are independent contractors since they own their own vehicles and set their own hours. Many people, including lawmakers, disagree, however. They continue to push for employment rights for rideshare drivers.

The advisory memo was not the end of Uber and Lyft drivers’ fight for employment rights in California. Back in 2018, Assemblywoman Lorena Gonzalez proposed a bill that would force rideshare companies to change the way they classified their drivers. The bill, AB5, would officially classify rideshare drivers in California as employees, along with the basic worker protections that come with this classification, thanks to a new process for identifying workers. AB5 would require Uber and Lyft to use a three-part system to prove a driver is an independent contractor and not an employee.

Unless these three standards apply, Uber and Lyft must classify the driver as an employee of the company, providing related employment benefits. AB5 would have serious ramifications for rideshare companies in California if it passes into law. Uber and Lyft would have to pay an additional $3,625 in wages and benefits per driver per year, according to estimates from Barclays. The total costs of the switch for each company would be about $290 million.

Why Drivers Are Fighting for Employment Status

California is one of the best places to be an employee. With an independent contractor status, a worker does not enjoy benefits such as health care, life insurance, FICA, paid leave, paid breaks, or wage or hour guarantees. If AB5 passes into law, it will be great news for rideshare drivers, who will benefit from all the perks of having an official employment relationship with Uber Or Lyft. The companies, however, say they may go bankrupt if the change happens.

Rather than reclassifying all their drivers, Uber and Lyft have suggested terms of their own to improve job satisfaction. They have both agreed to offer higher pay and more benefits for drivers, as long as they can continue to call them independent contractors. Recently, Uber suggested raising the minimum wage for drivers to $21 per hour while on trips to help staunch support for AB5. Lyft did its part to try to stop the bill by sending push notifications to drivers saying AB5 would compromise their scheduling flexibility.

If the state Senate and Assembly approve AB5, it will go to Gov. Gavin Newsom before September 13th. Many believe the governor is leaning toward approving the bill.

This entry was posted in General, Workers Compensation. Bookmark the permalink.