JUUL is a brand of electronic cigarette that has outsold many of its competitors in recent years. It is especially popular among young users due to its inconspicuous appearance, rechargeable battery and candy-flavored cartridges. Unfortunately, JUUL use among teens and young adults has led to a nationwide e-cigarette epidemic. From July 2017 to October 2018, the number of young people 18 to 21 who had tried JUUL increased by more than 400%. Many young JUUL users are unaware of the significant health risks that may relate to e-cigarette use. 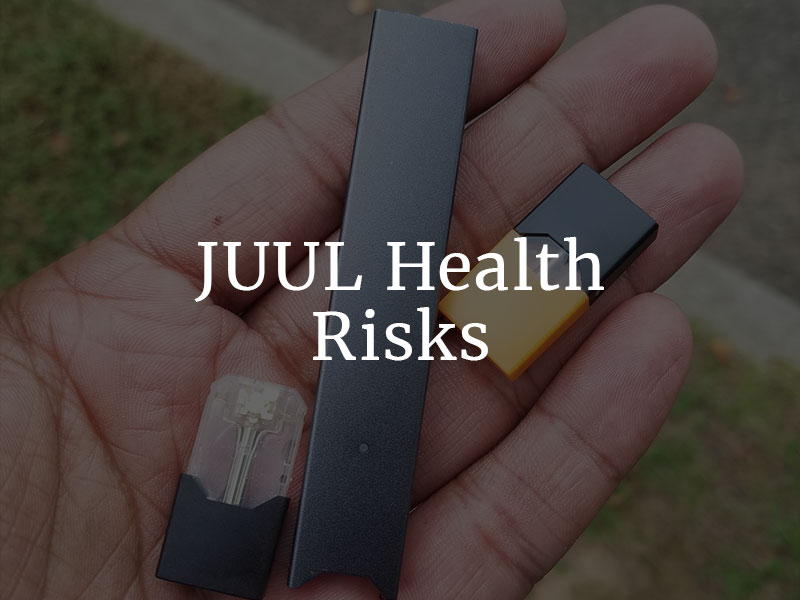 Nicotine dependence is one of the most serious health hazards of using a JUUL, especially among young people. The risk is exceptionally high with JUUL compared to other brands of e-cigarettes because it uses more than twice the amount of nicotine than other leading devices. A JUUL cartridge contains 5% nicotine, while a similar device, Blu, contains just 2.4%. Other e-cigarettes contain between 1% and 2.4% nicotine.

Studies show a teen that uses a JUUL is about four times more likely to start smoking tobacco in the future than other teens. Part of this risk relates to the high amount of nicotine in JUUL devices. Just one cartridge has enough nicotine to equate to an entire pack of cigarettes. When asked whether they knew their vaporizers contained nicotine, 63% of users ages 15 to 24 said no, they did not. That is almost two-thirds of young users who mistakenly believe they are only vaporizing flavor, not harmful nicotine.

Nicotine is so dangerous for young people because it could potentially impact the brain’s development permanently. Studies have shown nicotine exposure can have short- and long-term health effects for young people. The brain does not stop development until the early to mid-20s. Vaporizing nicotine using a JUUL at a young age could potentially interrupt brain development and put the user at risk of cognitive problems and psychiatric disorders as an adult.

Nicotine is not the only threat JUUL users face. Breathing in vaporized nicotine and other chemicals – most of which e-cigarette companies do not disclose – can lead to other serious health problems, including issues with the respiratory system and lungs. Two of the primary substances found in most e-cigarette cartridges are vegetable glycerin and propylene glycol. Breathing in these two ingredients exposes the body to toxins it otherwise would not come into contact with.

Unfortunately, the newness of the e-cigarette and JUUL craze means scientists still do not know the long-term consequences of vaporizing. However, experts recognize the risk of irreversible lung diseases and damage from inhaling harmful substances, including the condition referred to as popcorn lung: bronchiolitis obliterans. No known cure exists for popcorn lung.

One of the latest health and safety concerns involving e-cigarette users is a mysterious lung illness reported across 25 different states. The Centers for Disease Control and Prevention (CDC) is calling it a severe pulmonary disease. The CDC is currently investigating an outbreak of this disease it believes traces back to e-cigarette use. So far, 215 people have come forward with possible cases. Initial reports show the most likely connection between these patients is their use of e-cigarette devices such as JUUL. Many patients have reported using e-cigarette devices to vaporize cannabis products.

A less common, but still serious, risk of JUULing is the possibility of the device exploding in the user’s hand or catching fire in a pocket or at home. Although no reports of this happening have involved the JUUL brand as of yet, other e-cigarettes with lithium-ion batteries have ignited and exploded during use.

Exploding e-cigarettes have caused catastrophic injuries such as burns, lacerations, missing limbs, broken teeth, eye and ear damage and head injuries. Some users have died from their injuries. The cause of e-cigarette explosions appears to be defective batteries that can spark and ignite if stored incorrectly or overcharged. E-cigarette brands may be liable for injuries and illnesses their products cause consumers.

If you were injured by a Juul product or any other type of vaping product contact a San Diego Personal Injury Attorney.

This entry was posted in Defective Products, Personal injury. Bookmark the permalink.